We'd planned to have a nice little ride this afternoon. But ... things got a little exciting and now there isn't a hitch rail.

It was just a cascade of bad things - I asked Bill to help me tent Skeets' saddle pad, so he left Al tied with his saddle on his back, but not cinched on. Skeets let me fix her pad, but scooted sideways when I went to reach under for her cinch. Al thought that was scary and jumped, which caused his saddle to fall, which caused him to start bucking.
He stopped bucking and when Bill reached for him, he started up again, then Skeeter thought bad things were happening and pulled back, which made *her* saddle fall off, which made everything worse, so she pulled back harder and Washoe got to go for a ride when the whole rail broke off and the two of them skittered across the street. They stopped nicely and let us go untie them.
Al got put away, and Skeeter got re-saddled. For the very first time since her first saddling she bucked and bucked. Weird, but then I realized bad things had just happened while I was trying to saddle her.
Bucking didn't work - Grandma's dealt with pissy mares before - so once she settled down, she got to walk around the block while Grandma and Washoe rode. Her brain was firmly back in her head by the time we got back, so I mounted up and we rode around the parking lot before calling it a day.
When we got back, Bill saddled Alloy and made him go for a ride.
Now that that silliness is out of their system, the parade tomorrow should be a breeze.
Everyone is okay (humans and horses), but leaving the horses tied is going to be interesting for a while. 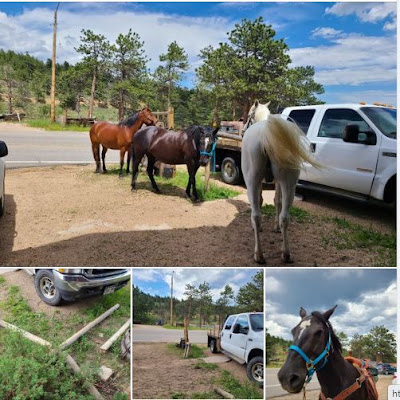