We had scheduled two days off this month - very important for us this time of year - so we could get some stuff done, have a night without guests and NOT fix breakfast for a couple of mornings.  We set this up months ago.

Fast forward a couple of months to when the request came in from GunDiva to transport her horse to a TV shoot for the HorseMaster RFD series.  It turned out to be right over our two days off - which by the way, turned into ONE day off because we had inadvertently booked two rooms in for the second night.  Yipes!  It sounded like fun to us: transporting horses to a beautiful ranch in the southern mountains of Colorado could actually be relaxing - to us.  We love to travel with horses, although we would rather it had been our own horses.  But hey, horses are horses and GunDiva's horse is family, too.  We arranged for our other daughter, Nebalee, to 'Lodge sit' for us, meaning come up and hang out to wait for the guests to come in that had gotten booked and stay the night to answer the phone.  We promised we would be back before breakfast so she wouldn't have to do that too.  (This turned into a great deal of work for her, too, as the phone never quit ringing, and I had left her with all the beds to remake.)  She may never volunteer to help us out again.

So Monday finally got here, we got everyone out of the Lodge on time (11:00 a.m.) and set about getting as much done as we could before leaving.  Had hoped to pull out at 11:00 ourselves;  Bill had taken the dog to the kennel in Estes Park, I stripped all the beds in the lodge, sorted laundry, gotten all the dishes done and the kitchen cleaned up, and we set about getting our stuff in the truck.  We did manage to finally get underway at 12:10.

We needed to head north 1 1/2 hours to GunDiva's to pick up her horse and our horse trailer, which had been left there when Bill dropped off Ranger.  Bill hooked up the trailer while I haltered Skeeter, and she loaded like a champ.  We then needed to pick up another horse in Longmont that was also hopping a ride to the shoot.  We even found our way there without any problems, met the two people who were going to follow us, loaded that horse and we were on our way.  Our only problem was that it was now 3:45 p.m. and traffic was picking up quickly; we were between two busy cities - Boulder and Denver - and had to decide just how to get on the road we wanted.  Thanks to the help of the girls following us, and their texting me directions as we went, we managed to get onto C470 ... but what a traffic jam!  Once we got onto Hwy 285, it was much better, but now 6:00 p.m.  After going over Kenosha Pass in horrible rain, and stopping for dinner at a cute little bar in Fairplay, we pulled into Julie Goodnight's place near Salida at 8:30 p.m.  Suffice it to say, we were all a tad tired, but happy.  The horses had traveled well.

Skeeter unloaded and was amazed to find five other horses in pens right there!  She behaved like a jewel in her new pen - while the two neighbor horses got all rowdy and nasty.  I don't think she ever figured out what the big deal was with them.  This was the first trip - other than being delivered to GunDiva's in a stock trailer - that she had ever taken, and she was handling it like a champ: no hollering, no fussing, no fighting. 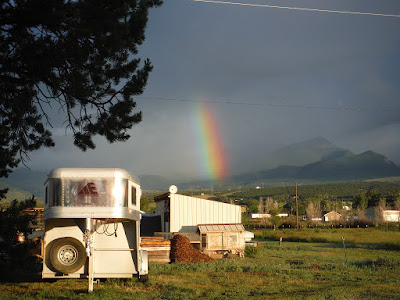 Julie was gracious enough to let us park our rig overnight near their 'bunkhouse', so we could sleep in the trailer.  It was heaven:  we were sound asleep before 10:00 p.m. - and when we woke at 5:30 and realized we didn't have to get up, it was even better.  We finally crawled out about 6:00 to a gorgeous sight of fog rainbows.  The fog had settled in the valley at the base of mountains and two rainbows peaked their heads out.  What a start to the day!  We settled ourselves into a couple of chairs on the patio of the bunkhouse to wait for other living beings, watch the day start, and wait for GunDiva.

Suddenly there were many people around: all the crew and cast members for the day.  Horses being brushed and shuffled from one spot to another.  It's busy times getting a TV show - or in this case, many shows - taped.  The weather cooperated for the most part and we spent our day watching the goings-on and lounging with Skeeter, who was taking it all in.  Whenever an episode finished up, a cheer would go up with lots of clapping of hands.  I swear that horse thought it was all for her.  She paid attention to every little detail. 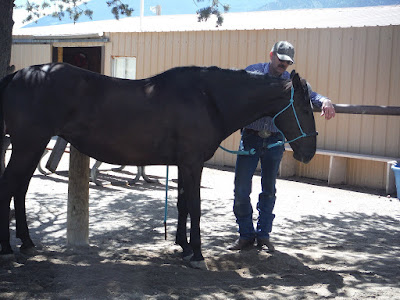 We used the time to best advantage by hanging out at the hitchrail, otherwise known as the patience post.  Skeeter doesn't have one at home and has never had to stand tied to anything for any length of time.  One time we tried tying her to her horse trailer but discovered the tie bar was not nearly strong enough; just one pull bent it.  Not good.  She did stand tied to our truck for about an hour with a saddle on one time, but that's just not the same as having to patiently stay put for long periods of time (an important tool for every horse).

When it was getting close to time for Skeeter's turn, GunDiva had gone off to get her 'show clothes' on and I brushed Skeeter 'til she shone.  Bill helped get the dreads out of her tail while I did her mane; I was even able to spray fly spray on her legs (even though GunDiva said she hated fly spray).  She was quiet and calm the whole time we worked on her, resting her chin on my shoulder as we watched the final prep for her.  Julie had talked to GunDiva about how they would do the shoot:  show some of the ground work that they normally did, introduce her to a bit for the first time, hop on her back bareback, and maybe even saddle her up for a quick shot.  Now remember, we had done all of that at home - except the bit part - and it seemed a dream to get it all on tape.


It was decided to use Julie's newly refurbished round pen - just in case.

Imagine everyone's surprise when GunDiva led her quiet, sedate horse in - and she went ballistic!  She couldn't stand still, didn't listen to direction, was just basically obnoxious.  When GunDiva leaned across her back, you would have thought she had never felt weight there before.  It was pretty quickly decided that Julie would take over.  In came the flag and the master.  We had a pretty exciting 20 minutes or so...and the cameras never quit rolling.  One of Julie's most common comments is not being able to actually get pictures of a horse being, well a horse that had problems.  Not so that day!!!  Skeeter did a great show of what a wild Mustang can do when it doesn't find any comfort in what's happening - but she was beautiful; all the majestic motion you see in the movies, happening right before our eyes.  Skeeter did finally calm down and 'get her brains back' as GunDiva put it.  She turned into her normal sweet self for the bit part, letting Dale Myler slip the headstall over her head and placing the bit in her mouth for the first time, then teaching how to use the reins at the withers to teach the horse to 'give to the bit'.  We weren't allowed to take pictures during the actual shoot because the big cameras pick up the shutter clicks.  You will have to wait for the episodes.

We are all still laughing at Bill (and Julie) getting drug around the corral by a horse not wanting haltered, or Skeeter trying to chase the dog away from the gate, or any number of other stunts she pulled in a short period of time.  We can hardly wait for the episodes to appear on RFD-TV; the footage was fantastic!

Skeeter walked quietly back to her pen and spent the rest of the afternoon eating her hay.  We watched the last of the filming for the day, a horse getting adjusted by a chiropractor, and decided to head for home.  Skeeter did give us a bit of attitude about loading in the trailer; she was just DONE.  It's amazing what a granola bar will do, though.  As soon as GunDiva walked off, I showed Skeeter the bar and on the trailer she went.  Pam loaded her horse up and we started down the road.  We stopped and ate at a cute little bar in Buena Vista and felt quite content.

That contentment ended rather abruptly, though, when Bill commented on the brakes acting 'mushy' on one of the long downhills.  He decided we had better stop at the next station on the way to check it out.  Oops - no brakes!  Fortunately the trailer brakes held and we got stopped safely.  Turns out we had a blown brake cyclinder on the truck and all the brake fluid had leaked out.  Bill was able to do a temporary fix and we were back on the road.  We pulled into GunDiva's place at 12:30 a.m.  Skeeter was pretty excited to get out of that trailer, but she still unloaded like a lady.  Ranger hopped on the trailer about as fast as Skeeter exited.  He was ready to go home.  We pulled into the Lodge at 2:30 a.m. to the hollering of all three of our horses greeting each other.

We had traveled over 600 miles towing horses.

And at 5:30 a.m. we were cooking breakfast for our guests.  Back to business as usual.  Our 24 hours went fast and we had a great time!
Bionic Cowgirl


Posted by Allenspark Lodge at 8:22 PM